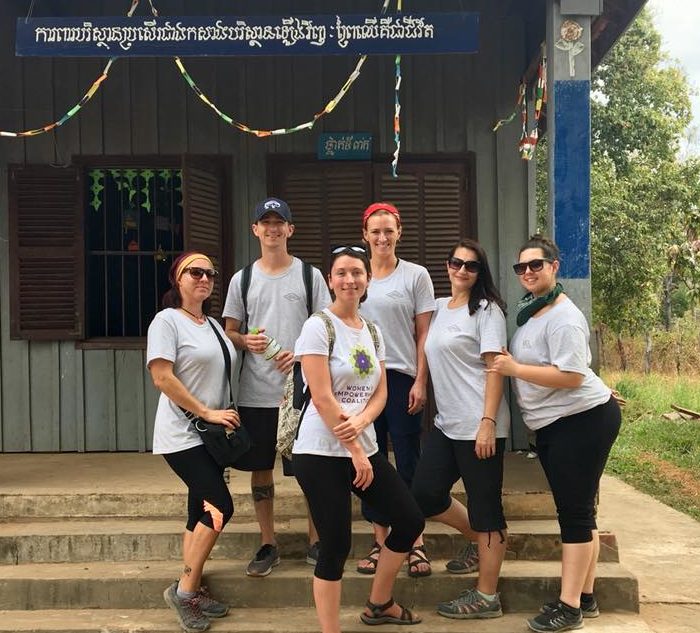 On January 15th, our group of 6 dedicated WECO volunteers departed for Cambodia on a 21-day trip of adventure travel, project work, and cultural immersion. We spent the first two days bouncing around the sights of Bangkok and diving into every form of Thai food we could find: various street food-carts, noodle soup, mango sticky rice, fresh fruit – all of it! We were introduced to the bustling streets by tuk-tuk, thrown immediately into the constant movements of the city. Of the many sights we saw, Wat Pho, Wat Saket, and Wat Arun gave particularly stunning examples of the magnitude and beauty Thai temples have to offer. 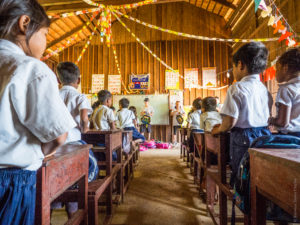 We then spent 10 days in Siem Reap, working with the Ponheary Ly Foundation (PLF) and the Women’s Resource Center (WRC), and exploring the vast wonders of Cambodian culture. Beginning with an orientation from Vanthat with the WRC, and a full day with the PLF in one of the schools they help support, WECO got straight to work! We hopped on a bus to Kohker village, about 3 hours from Siem Reap, and brought all of the 162 (or so) students lunch as well as new backpacks for the school year. 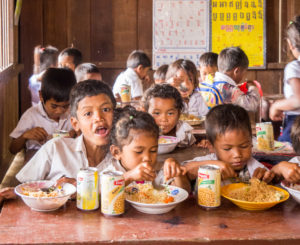 Throughout the day our guide, Hannah, explained the PLF’s programs for primary, secondary, and university students, and gave us important context for understanding the nuances of the Cambodian education system. It was an especially fun day because it was also Chelsea’s birthday. Instead of celebrating with cake and ice cream, we decided to celebrate with bugs! She and Shanyn “went halfsies” on a tarantula, and Casey went big with his own personal scorpion. Megan, Rebecca, and I were cheerleading documentarians of their edible adventure. 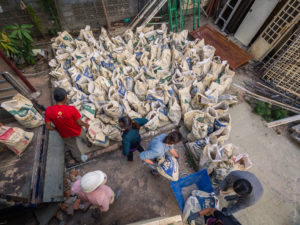 One of at least ten total loads of brick, rock, and miscellaneous trash we cleared at the WRC

The next day we were back at it. In total, we had three full days of demolition clearing and site preparation at the WRC, followed by two days spent priming, painting, and decorating for the weekend community gathering. Pheaktra, our wonderful translator, helped us not only communicate with the construction site manager, but also participated in all of the manual labor we did while there. She was a wonderful addition to our team, and we miss her hard work ethic and positive attitude! 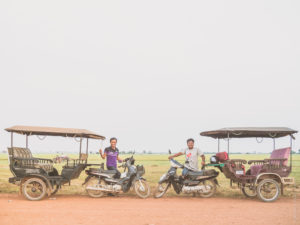 Samuth and Saven with their tuk-tuks

We divided our time working at the WRC with cultural excursions led by our good friends and expert tuk-tuk guides, Samuth and Saven. They took us various places around the countryside where we learned about rice harvesting, fishing, incense-making, rice noodle production, and the wonder of palm trees (and palm sugar)! We also spent a full day with them exploring the stunning temples of Angkor Wat, and special nooks they had discovered during their years as guides. Samuth and Saven were also very kind to cook dinner for our last night in Siem Reap: a traditional Khmer BBQ that was the best food we’d eaten all trip! We were very fortunate to be able to spend the evening with them and their families, and enjoyed a special karaoke performance by Samuth and his daughter, Maya. 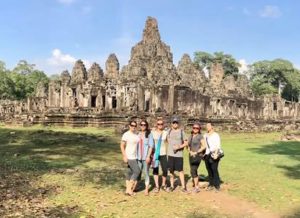 Group photo in front of Bayon temple at Angkor Wat

During the free time we had, we enjoyed lounging around the pool at our hotel as the days were quite warm, and spent our evenings walking through the Night Market and partaking in some of the city’s nightlife. We also attended a unique performance by Siem Reap’s modern circus called Phare, which combines elements of music, dance, Cambodian history, storytelling, and talented acrobatics. In-between working and exploring, we were sure to take full advantage of the fantastic and affordable massages offered through our hotel, or at one of various spas interspersed throughout the city.

Kimsan running a financial management workshop at the WRC

Part of our time spent with the staff at the WRC also included participating in and observing three of the informal workshops they hold in-center on personal hygiene, parenting, and financial literacy. It was great to be able to see the process of each workshop, as well as the dedicated work of the WRC staff in preparing the trainings. It also gave us insight as to why the childcare center will be so important for the women, because many of them had to supervise their children during the workshops. Having a safe, fun, and educational environment for the children will be good for everyone! 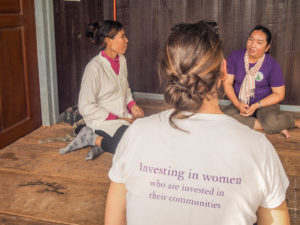 We were also were able to participate in some of the WRC’s critical village outreach with Kimsan, Vanthat, and Sreinat. We talked with 7 of their 40 dedicated ambassadors, and each person (4 men and 3 women) we sat down with expressed being eager to serve their communities so that they could better their lives through education and support. The 4 male ambassadors we spoke with also serve as intermediary security officers for community members to go to if they need help with family issues or in instances of abuse. Each ambassador said they strongly desire to continue working with the WRC to recruit people from neighboring villages for future workshops. 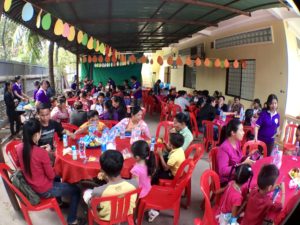 The community gathering at the WRC

Our last day in Siem Reap was a magical one. We were very excited for the WRC’s Community Party that introduced the idea of the childcare center to the community. As part of the project, we brought educational toys such as blocks, books, stuffed animals, posters, and puzzles with us to use for the future center, so we spent the first part of the morning preparing the rooms for the children to play. While the WRC held a parenting workshop for the first part of the morning, WECO volunteers had craft stations for the kids to make paper bag puppets, paper plate masks, or to just go wild. 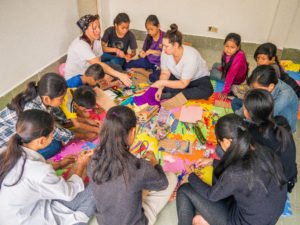 It was a great time, for us and for attendees! After the delicious homemade lunch made by friends of the WRC’s, there was a hygiene workshop held on handwashing and each family was sent home with a hygiene kit. There was also music and dancing, both traditional and modern Khmer, and from one of our volunteers! Shanyn performed the hula ‘auana (a traditional Hawaiian dance), which motivated one of the women who attended (and who used to be a traditional Apsara dancer) to show us some Khmer dance moves. Eventually other partygoers joined in, and we had ourselves a fun time dancing. 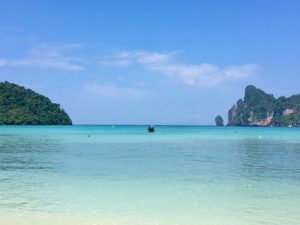 While our departure from Siem Reap was bittersweet, we were also very excited for our next adventure stop: the warm, white-sand beaches of Phuket, Thailand’s largest island. During our stay, we hopped a ferry to the stunning Koh Phi Phi islands and spent the day sunbathing near the beautiful turquoise-blue water. It was a perfect place to get some R&R. Our next stop was Chiang Mai, a less bustling city in the North of Thailand, with more opportunity for leisurely wandering and a tasty variety of food. 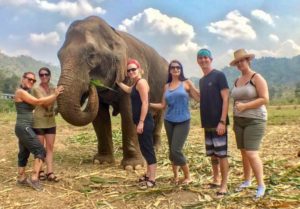 The group with “Watermelon” at the Elephant Nature Park

We spent our days in Chiang Mai casually enjoying the temples, highlights including: Wat Umong, Wat Suon Dok, Wat Chiang Man, and a hike up to Wat Phra That Doi Suthep. We also visited Elephant Nature Park, a sanctuary and rescue centre in the Northern countryside for elephants who largely come from abusive pasts. The center was established by Sangduen “Lek” Chailert over 16 years ago because she was incredibly motivated to rescue injured and mistreated elephants (among other animals such as dogs, cats, and water buffalo), and to educate tourists about responsible elephant practices. 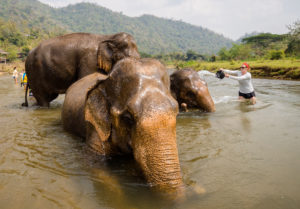 Bathing the elephants after (and before) feeding

We spent the day volunteering and interacting with the elephants: we fed them (multiple times), bathed them, and walked them with the volunteer guides through the beautiful Thai jungle that surrounds the sanctuary where we all ate lunch together. Throughout the day our guides shared more about their stories and the nuances of elephant life and behavior. It was a lovely afternoon and a great way to support a worthy initiative. 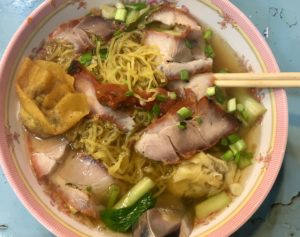 Our last couple days were spent in Bangkok, zooming around on the BTS, visiting various shopping malls, and delving into some urban exploration complete with market haggling and experiencing some of the city’s dynamic nightlife – of course all with a wide smile. While we loved the trip, we were all ready to return home to our loved ones. It was a great first WECO volunteer journey, and a fantastic group of people to experience it with. A big, endless thank you to Megan, Chelsea, Casey, and Shanyn for each of your dedicated, fun-loving spirits; your positive attitudes and big hearts made the trip a wonderful success. Thank you!

To see more pictures and to stay connected to our work with the PLF and the WRC, please follow our Facebook page.